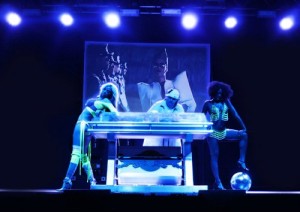 Whether you live in or just visiting, Orlando Florida has developed a reputation of having a rich nightlife that includes everything from hole in the wall bars to elite dance clubs. With every successful nightclub there’s always a great Dj that has got them to that point,when clubs look to fill their venues, they usually look no further than Richie Rich. Richie has held residencies at some of the biggest and most legendary night clubs in and around Orlando Florida. Richie’s success did not come without huge sacrifices and relentless long hours.

DJ Richie Rich started his musical journey many years ago spinning at the skating rink he grew up at the young age of 15, he was first influenced by the sounds of the late 80′s, funk and  early 90′s iconic hip hop artists such as Run DMC,Heavy D, Snoop Dog, Guy, Slick Rick and NWA. Richie first became interested in Deejaying “professionally” in the early beginning of the millennium and decided to purchase his own first set of turntables. Richie then began to hone his skills. Richie started off his career  a lot less glamorous as one might think. After hitting the pavement, running and looking for anything that would get him behind his decks and in front of a crowd, Richie found his first opportunity in the form of a mobile DJ while working for local event planner. Richie ended up playing for various events from weddings to teenage pool parties which had him playing everything from the electric slide to booty music. He didn’t realize it was at this time he was learning what to play at the right time and becoming comfortable behind a microphone would later shape him into the DJ he is today.

DJ Richie Rich’s first experience as a “Club DJ” came in the form of a small overflow room affectionally called the dead room when invited to play at a local EMO club turned EDM on tuesday nights. After playing a couple of nights and exposing Orlando to his talent, Richie was invited to play at a local bar across the street from the University Of Central Florida. The bar owner saw what Richie Rich was capable of, along with increased bar sales, he was then offered his first DJ residency, as they say, the rest was history, building up a huge following with the local university crowd. Richie Rich became the go to DJ when club owners looked to fill their clubs. Doing well for a couple years on the college circuit, that success then jumpstarted him performing at major spring break events and clubs in and around Florida, which eventually landed him a cameo on the “Regis and Cathy Lee show” for one of his Spring Break events in Daytona Beach. Richie still wanted more out of his career  and with a reputation of being a floor filler, he set his vision on Downtown Orlando’s Elite night clubs. His first major introduction into the premier club scene came in the form of a saturday night residency at a club called The Dragon Room,which seemed to be a world apart from his many years deejaying to drunken college kids. Dragon Room catered to a much higher end clientele. Richie has always been true to his craft and no matter which venue, his talent always shined through keeping the dance floor jumping and VIP always full of high rollers, athletes and celebrities. Richie has spent many years building up a a long list of credentials and nightclub residencies, with that exposure, he was then asked to become part of Clear Channel Radio doing a live 3 hour mix show every Friday and Saturday night to hundreds of thousands of listeners reaching from Tampa to Jacksonville Florida and worldwide on the internet. Richie’s success from his new mix show then landed him a position as the main resident DJ at the infamous ‘Club Paris’ which gained worldwide press for being affiliated with Celebrity Party Girl Paris Hilton.

Currently Richie Rich is the resident DJ Friday & Saturday Nights at the The legendary Beacham Theatre located in downtown Orlando since the beginning of 2009.  Sunday nights, for the past 9 years, you can find him at Walt Disney World, Downtown Disney,  at Live Nations own House of Blues Orlando, which holds the title for the longest running EDM night in the US surviving for over 16 years. House of Blues Orlando was elected by billboard.com in 2014 as the #1 nightclub in the country. During his run of 9 years with Live Nation, Richie has had the opportunity to be the opening act for many of the industries biggest artists ranging from Eryka Badu to Mr. Wold Wide himself, Pitbull.  The future for Richie Rich is wide open and with no end in site with an insatiable work ethic and talent that’s very hard to come by in today’s world of auto-tuned Laptop Dj’s that care more about the software they’re running than actually engaging the crowd they are there to entertain.